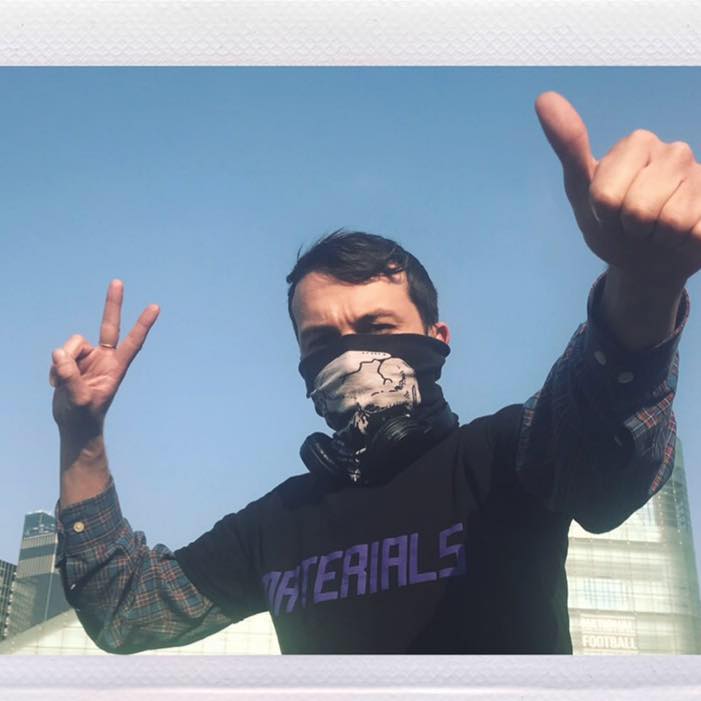 School for some can seem like a lifetime ago, I know it does for me.  Although it’s not actually that long ago in dog years, the experience was enough for me to forget about.  I hated learning, I hated teachers, I had acquaintances, but to call them friends was a stretch, my mates were outside of school.  The only decent thing about school was football and music but me being the muppet that I was sacked off music after two years of playing the fucking glockenspiel without another instrument in sight.  Suffice to say it didn’t offer me much but I didn’t offer much to them.

Just a few years younger than me at a school in a city that I would fall in love with was a young man named Rory Birch writing powerful poems about “war, class, religion and being a messed up teenager”, writing his first song at the tender age of 10 and writing a song at 14 that would be the start of his rap journey.  With early influences of classic bands like Led Zeppelin, The Stone Roses, The Beatles and Oasis, Rory was also religiously listening to Tupac, Biggie Smalls, Streets and Dizzie Rascal giving him the confidence to turn those poems into rap and create his own style of rap.

In his late teenage years, Rory got involved with the always bustling live music scene in Manchester including being a Sound Tech at The Roadhouse on Newton Street, another great independent venue that sadly closed it’s doors in 2015 and at various other venues across the city before being awarded a scholarship at SSR studios.  “Spending as much time in the studio, meeting great people and new friends”

It was around this time Rory met musician and producer, Dean Glover, a partnership that is still going strong today having worked together on numerous projects over the years culminating in what is now Ror Materials. Ror Materials is Rory’s unique vocal style and in his own words is “a fusion of eclectic sounds, rap based vocals but music and beats are important, varying between different styles at different times”.  Initially the sound were fast, break-beat driven inspired by rave, jungle, rock, drum n bass artists such as The Prodigy, some classic old skool rave sounds, but now anything is possible, Rory continues “who knows what’s next, maybe a techno track or something guitar driven, anything is possible”.

So where do the ideas for the lyrics come from? “It doesn’t come from one thing, I don’t sit and think about the initial idea usually, it could come from anything, a sign on the street, something on TV, an overheard comment or conversation, something political, sometimes deep and personal life experiences, forward thinking, the desire to help, heel and create understanding but to be honest just saying this, being alive is inspiring”

And yes, anything is possible, for me it’s two words, it’s two words that don’t really go together, it’s Uniquely Diverse and it’s the true ethos of punk in a way, it’s a Bowie thing like I don’t even know what’s coming next but it’s going to be great but I’ll do things because they feel right and I’ll do it because it’s what I want and not for the masses.  So I guess I’m saying it’s “Uniquely diverse rap with a punk ethos” Oh and in case you haven’t worked it out ……. It’s fucking great!! – There’s your quote!

“And the great thing is, it’s still evolves constantly”, says Rory, with Dean Glover (producer) in the background and cameos from drummer Ben Robinson and vocals from the amazing Janileigh Cohen, it’s been an interesting ride so far, couple that with Rory collaborating on projects with Wolves On The Hill, Kids In Care and Janileigh Cohen, it is only going to get better and better, it’s clear that Rory loves what he does, “I’ve always had a hunger for learning, I love creating, I feel me doing this.  I want to bring joy to people, bring love and emotion and also to provoke, I have the platform and I know I’m good at it”

“The lock-down has given me a chance to download a lot of new music, I’ve done some of my own live streams too, it’s a great way to play our tracks and interact with people during this climate.  Myself and Dean actually built a song via Zoom sharing the screen of the music software and building a track 2020 style (isolation), utilising technology, overcoming things, writing, watching tv, thinking …”.

You may have been lucky enough to see Ror Materials live locally or at their event last year but if you haven’t then follow Ror Materials on the usual Social Channels and get ready for one big fucking party when all of this blows over.

Some exciting news that was dropped into the interview is that is a track that is a collaboration between Ror Materials and Twisted Wheel founder Jonny Brown …… Now if the thought of that is not enough to make you smile as the world sits in pieces then fuck knows what will!